Underwater Acoustic Sensor Networks(UWSNS) can consist of a large number of sensors on and underwater which can communicate via acoustic links. Similar to terrestrial WSNs, these networks provide numerous advantages in terms of coverage quality, labor, cost and deployment as opposed to traditional underwater sensor networks.

For such cases, there needs to be a mechanism to remotely deploy sensors in reasonable times. Since manual deployment is out of question due to accessibility and time constraints, one possibility would be to randomly drop sensors on the water surface from a helicopter and then expand them to 3-D with depth adjustment. This requires the ability of the sensors to adjust their depths in the water via a mechanism which can change the weight of the sensor using air or water. The vertical movement of acoustic sensors resembles self- spreading of sensors in 2-D environments if they have the ability of move. While there has been studies leveraging this capability of acoustic sensors to expand their coverage, none of them can guarantee connectivity of the stretched network with a surface station so that the collected data can be send to an on-shore station. To the best of our knowledge, self depth adjustment of sensors subject to connectivity constraint is a novel problem that has not been studied in the past.

In this project, we propose distributed node deployment schemes for UWSNs which only requires random dropping of sensors on the water surface. The goal is to expand the initial network to 3-D with maximized coverage and guaranteed connectivity with a surface station. The idea is based on determining the connected dominating set of the initial network and then adjust the depths of all dominatee and dominator neighbors of a particular dominator node for minimizing the coverage overlaps among them while still keeping the connectivity with the dominator. The process starts with a leader node and spans all the dominators in the network for repositioning. 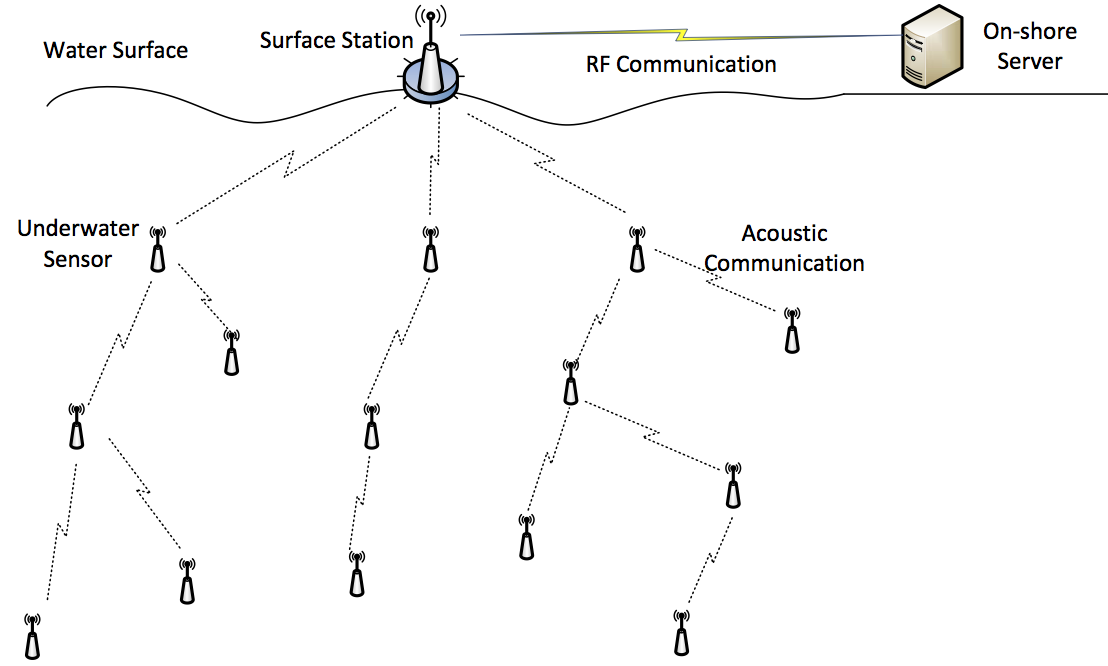